Tips for community groups about running a letter-writing campaign.

What is a letter-writing campaign?

A letter-writing campaign is an organised effort to coordinate as many people as possible to write to a decision maker (e.g. a Councillor, MP or Minister), asking them to take a particular action.

Is letter-writing a useful tool for your campaign?

Letter (or email) writing is most useful if used as part of a well-planned wider campaign strategy. It can help show that people feel strongly about an issue, and this puts pressure on decision makers.

Before starting your campaign, think through:

Macmillan have a useful guide to campaigning for small local groups. We have information to help you write a campaign briefing, organise a petition, write a news release and organise a public meeting.

Before asking people to write letters, you should decide:

Letter-writing is most effective if each letter shows that the person writing it really cares about the issue. This comes across better if everyone writes a letter in their own words.

However, letter-writing campaigns are also more likely to be successful if the target receives a large number of letters. It can be easier to get people to send letters if you provide the letter and just ask them to sign it.

The key to running a letter-writing campaign is getting the right balance between these two priorities.

What to put in your letters

Letters written in people’s own words show that they really care about the issue. They look less like a coordinated campaign, and more like people have independently decided they care enough to write a letter.

This can be very powerful and persuasive. It is especially important that letters are individualised if the recipient will only receive a few letters. If you don’t have time to engage lots of people, make sure any letters sent are heartfelt and genuine.

When asking people to send their own emails or letters, you should provide them with:

The downside of asking people to write their own letters is that it is more difficult and time-consuming, so it’s harder to get people to do it. If you are aiming to get hundreds of people to send letters, it might be better to provide something for them to sign and send.

A standardised letter/email/postcard should include:

Providing a standard message people can send in an email enables them to send off a letter very quickly, without having to think about what to write. However, emails are easier for decision-makers to ignore. A few emails in a very busy inbox are unlikely to have a big impact. Emails are more likely to be effective with a local decision maker, such as a Councillor, than a minister or MP who may be receiving thousands of emails every day.

Some email programmes, such as MailChimp, will allow you to build a link to a pre-written email for your supporters to send. All they have to do is click the link, and their email programme will open up with an email ready to send off.

Providing postcards is a way to make letter-writing very easy for the sender. It’s best to get people to sign the postcards, then you gather them all up and post them. This ensures they actually get sent.

You could organise a postcard campaign by holding street stalls, going door-to-door, or attending events at which you are likely to find a large number of supporters. Whichever way you do it, we suggest you:

If your group is based in Sussex you can print postcards, fliers and posters in the Resource Centre print room. We also have folding tables, a free-standing sign and clipboards available for hire.

Here is an example postcard: 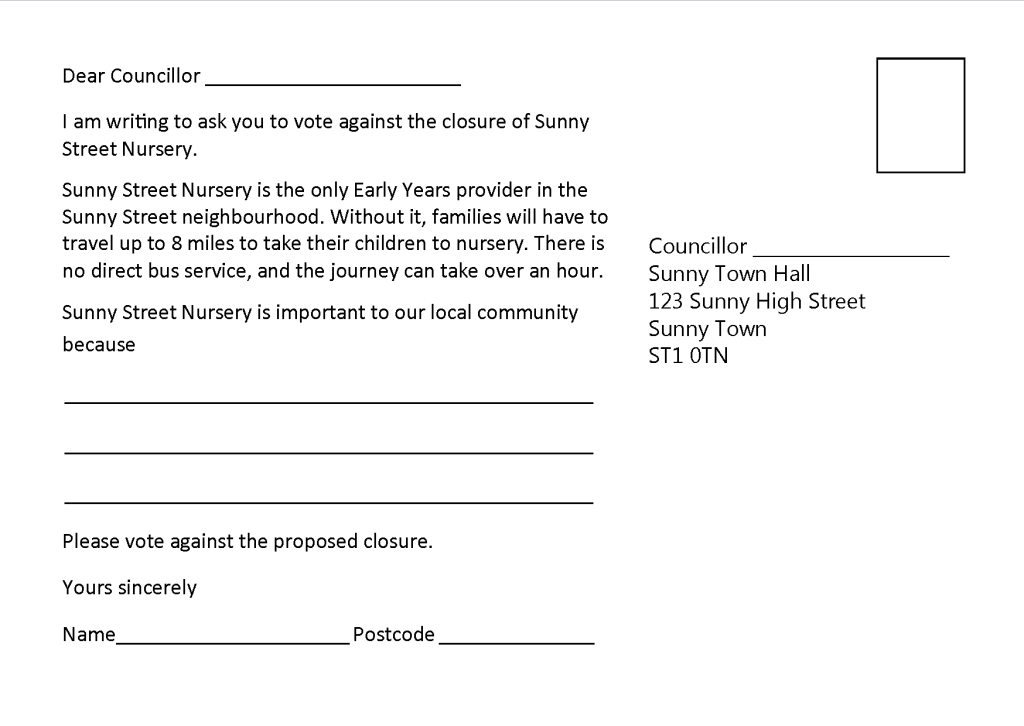 For more information about running campaigns, see our pages on:

We hope you find this page useful. Would you like to make a donation?

All Resource Centre information is available for free because we know small community groups have small budgets. However, we are a small charity, so if you are in a position to make a donation, it will help us to keep running this service into the future.

We use some essential cookies to make our website work properly. We also use Google Analytics cookies to get anonymous information about how the site is being used. This helps us to report to our funders. To find out more, see  our Privacy notice for website users.